This new historical romance series is set in the 1800s. Each story has a mystery to solve and is family friendly. I have released a new book in this series, which takes place in 1839. This was a time of turmoil for many, especially for those who supported the abolitionist movement.

Previous series titles, Angel's Serenade. Emmeline Scott is raising her sister’s two children and is surprised when she finds out the new doctor in town is helping her nephew adapt to his surroundings. It is not easy to be uprooted and have to start a new life. As Emmeline gets to know the charming doctor, Lucas Golden, they become intrigued by her neighbor’s mysterious behavior. Will they discover his secret? And who is the leader of the River Pirates, who is causing so much havoc?

One Last Dance. Felicity Brooks is a talented artist but her career is cut short when her father passes away. Realizing the importance of family, she travels home to care for her mother during this difficult time. When Felicity meets their charming new neighbor, a fine-looking bachelor, she soon discovers that he is hiding his true identity. Nicholas Adams is on a quest. But that is not all. When she finds out that someone is after a valuable heirloom…a precious treasure that her father discovered in his attic, her life takes a new turn. After realizing how much she misses her father, will one last dance heal her broken heart?.

A Pleasant Rivalry, NEW. Angelica Davis is surprised when she finds out that an old schoolmate has returned to Willow Valley to take over his grandfather’s business. Since she writes articles for the Chronicle and Simon Morgan owns the Willow Valley News, they are rivals. Who will be the first to discover the identity of the jewel thief or the arsonist, Angelica or Simon? Gradually the feelings she once had for him return as they search for the same stories. To her amazement, Angelica realizes she is losing her heart to her rival.

“I loved this book!  It was a great historical read and full of surprises.  I totally didn't expect what happened… to happen.  The time period was an interesting one and I love how the author intertwines historical events into the story.  It was a new and refreshing tale.” –Sunnie Reviews

You will learn about the “Trail of Tears,” the abolitionist movement that began in Illinois, the refugees who were kicked out of Missouri, and you will fall in love all over again as you see Simon and Angelica “bond” in A Pleasant Rivalry.


It has been thirteen years since Angelica saw her classmate. Simon left at the age of seventeen to join the Navy. Now he’s back to run his grandfather’s newspaper business. With Simon heading up the Willow Valley News and Angelica writing articles for the Chronicle, the competition is on. Who will get the story first? Angelica or her rival?

“Watching the rivalry between these two will have you on the edge of your seat, waiting to see what happens next. I would give this book a higher rating than a five-star review if I could. Linda Weaver Clarke is an amazing author.” – Debbie Jamieson, Reviewer

Linda Weaver Clarke was raised among the Rocky Mountains of southern Idaho and now lives among the red hills of southern Utah. She is the author of historical romance, cozy mysteries, swashbuckling romance, a children’s book, and nonfiction. Linda teaches a class about writing your family history, that is free to the public at the Family Search Center in Southern Utah. She is also a missionary at the Family Search Center where she helps people find their ancestors and learn about their heritage. 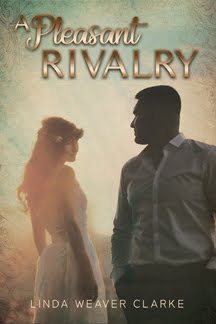 NOTE from Colleen: Linda is featuring me on her blog.
Guest post

"I will lift up mine eyes unto the hills, from whence cometh my help. My help cometh from the LORD, which made heaven and earth." Psalm 121:1-2 KJV